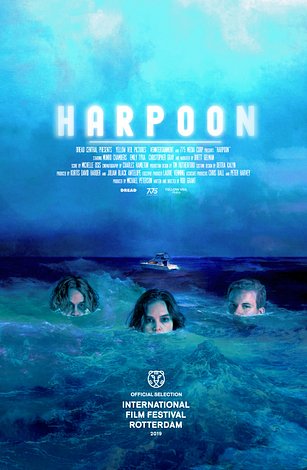 Harpoon is one of the best reviewed movies of the year! When maladjusted Jonah (Munro Chambers, Turbo Kid) is attacked by his hot-headed best friend Richard (Christopher Gray) - who believes Jonah and his girlfriend Sasha (Emily Tyra) are sleeping together - Richard apologizes by taking them on a cruises. After an accident renders the boat inoperable, more dark secrets and sexual tensions begin to emerge. With their rations quickly dwindling, the three friends must choose to put aside their differences or risk dying on the open water.

“It's often funny and generally suspenseful - a fine afternoon on the water, all things considered.”
– Los Angeles Times

"The energetic mix of mayhem and snark will appeal to those who like their comedy horrific and their horror comedic.
– Variety

“Harpoon lives up to its festivall-fueled hype, and should be seen."
– Orignal Cin

“A nasty look at pride, betrayal and misnamed nautical gear on the open sea.”
– Hollywood Reporter

“A modern-day fable about lies, friendship, and betrayal."
– GQ Magazine

"Those who can stomach the blood-letting are likely to cheeer this inventive foray into high-stakes, high-jinks on the high seas."
– Starburst

"Rob Grant's genre-stretching film is both a barbed comedy of manners and a survival picture."
– NOW Toronto