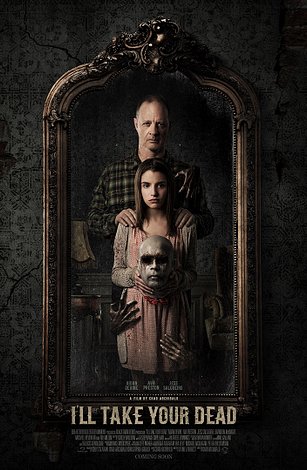 William has a simple job: he makes dead bodies disappear. His country farmhouse has become a dumping ground for gang related casualties  while his daughter Gloria is convinced that some of them haunt their home. After a woman's body is dropped off on their doorstep, William realizes that she's not actually dead. As he tries to figure out what to do next, the woman's assailants get word that she's still alive and make a plan to finish what they started.

“I'll Take Your Dead is a gem of a genre mash-up that's well worth tracking down.”
– Patrick Bromley, Daily Dead

“I'll Take Your Dead is haunting and heartbreaking in equal measure."
– Kat Hughes, The Hollywood News

“The taut, original, and unpretentious Canadian thriller I'll Take Your Dead is a no frills sort of production that boasts a wonderful idea, some appropriately nasty and gory flourishes, and an exemplary cast."
– Andrew Parker, The Gate

“This one's at its best when it's just watching its characters figure each other out in their domestic isolation, and slowly bonding in the face of a common threat."
– Norman Wilner, Now Magazine

“...the story and strength of the cast make it a compelling film."
– Ricky Church, Flickering Myth

“...a portrait of a very unconventional family which finds its own way of accomodating, even moving on from, the deaths that have haunted it."
– Anton Bitel, Sci-Fi Now