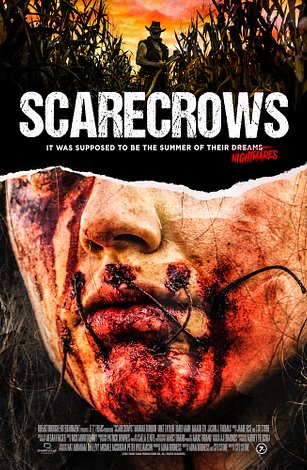 While on a hike to find a secret lagoon, four stoners have no choice but to pass through an ominous cornfield. Unbeknownst to them, a psychotic farmer despises trespassers and has vowed to kill anyone who crosses his land by turning them into living scarecrows and leaving them to rot in his fields. Once one goes up... it never comes down. From 5'7 Films and director Stu Stone (The Haunted House on Kirby Road), check out the film that Decay Mag says "has the potential to become a cult classic."

"Credit each actor with adding a lot of flare, which ultimately goes a long way to elevating Scarecrows from its bare bones brethren."
– Rue Morgue Magazine

“Pound for pound, Scarecrows is a mighty fine fright flick; the cast is game, the killer is memorable and it has one-of-a-kind modus operandi, and the laughs and lacerations come in equal measure!"
– Horrorfuel.com

"Scarecrows has great camera work, great acting and great special effects. I think it's going to be a sleeper hit and one of the most anticipated releases of this winter."
– Horror Society

“Stu Stone and Adam Rodness suceed in serving up a morbidly cold and grisly villain. Scarecrows has the potential to become a cult classic."
– Decay Mag

“The film moves at an active clip and actually has a few one liners that made me laugh quite a bit."
– ComicCon.com