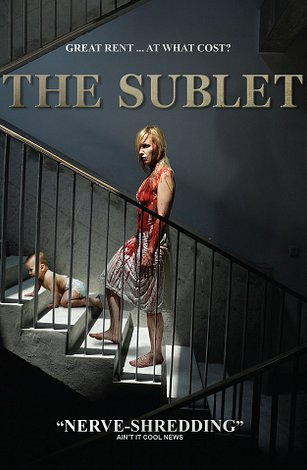 "Filled with an overall sense of creep from minute one, the scares and shocks intensify to a nerve-shredding level by the end of The Sublet."
- Ain't It Cool News

"The Sublet really does pack its own sui generis punch to ensure it's as unsettling as claustrophobic creep-outs come."
- Scream Magazine

"If you want to watch something that has purpose and builds atmosphere and terror to wonderfully eerie heights, this is the film for you."
- Geek Chic Elite

"Replaces juimp scares with a nearly palpable uneasiness that begins right at the dark and dreary opening and doesn't let up until about an hour after the movie is over."
- Legless Corpse

"If you're in the mood for something requiring thought and attention that results in results in a decent payoff; this one's for you."
- Modern Horrors

"The Sublet stands as one of the most effective psychological horror films I've ever seen."
- Horror Geek Life

Joanna is a new mom coping with her baby in an odd sublet apartment as her husband neglects her to foucs on his career. Joanna begins to question her sanity as she suspects that the building is haunted. As the walls literally close in around her, she discovers a violent past to the apartment, but is is postpartum depression or does the building want Joanna to give the ultimate sacrifice?