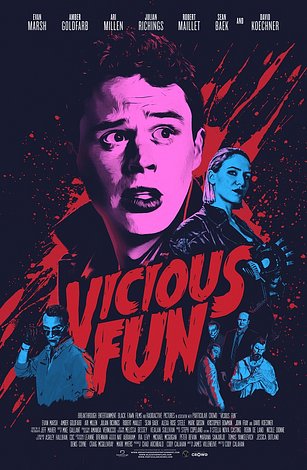 Joel, a caustic 1980s film critic for a national horror magazine, finds himself unwittingly trapped in a self-help group for serial killers. With no other choice, Joel attempts to blend in with his homicidal surroundings or risk becoming the next victim.

"Vicious Fun lives up to its name. It has a terrific balance of horror and humor that will appeal to the masses, marking Vicious Fun as one of the best horror comedies of the year. ”
– Andrew Mack, Screen Anarchy

“This sidestep into comedy is a bold one - because it's not easy to balance laughs and scares as competently as this - but it all works.”
– Dan Stubbs, NME

"Vicious Fun is a hoot, packed with references without ever feeling like studied post-Scream meta chin-stroking."
– Richard Whittaker, Austin Chronicle

“Calahan really knocks this one out of the park, assembling a fantastic ensemble cast who are more than capable of keeping up with the film's frentic pace and relentless comedy."
– Stephanie Malone, Morbidly Beautiful

“Vicious Fun is exactly what the title suggests. Complete with neon-soaked nostalgia and stellar performances, it makes for an exhilerating and enticing throwback. ”
– Kat Hughes, The Hollywood News

“Calahan hits his stride with this moive that is simultaneously shocking, surprising, and downright delightful. The concept is bonkers, the SFX are silly and over the top, and the soundtrack is fabulous."
– Luke Rodriguez, Modern Horrors

“Vicious Fun delivers handsomely on the promise of its title, serving up a brightly coloured cocktail of laughs, scares, suspense and gore, mixed with plenty of genre thrills."
– Matthew Turneer, Hero Collector

“Vicious Fun is a loving homage to the schlocky horror flicks that lined video store shelves throughout the '80s."
– Victor Stiff, That Shelf